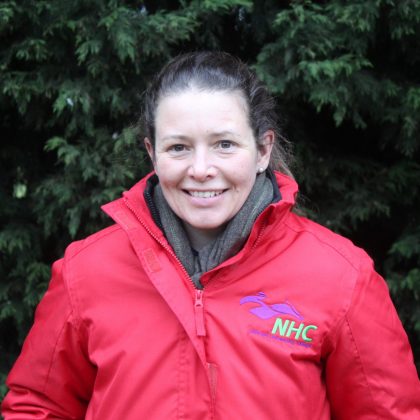 Leanne started at Kingsclere after finishing school in 1995 and was apprentice jockey to Trainer, Ian Balding. She rode seven winners, the last of which was “The Governors” last winner as a Trainer.  Since 2003 she has done the travelling for Andrew Balding and has travelled horses both in the UK and around the world.  Among others she travelled Group 1 winners Side Glance and Blond Me. The former racehorse “Sidey” now lives with Leanne and is about to start Eventing at the grand age of 15.

The year after Sidey won the Group 1 McKinnon on Derby Day at Flemington, she was awarded the Godolphin Stud and Stable Staff Employee of the Year Award 2014.

She has an HGV licence and Transport qualification and NVQ 3 in Racehorse Care and Management.

Leanne got married to Ben in 2019 and has 2 step-children.  When not working, coaching, horsing around or running around after her step-children, she is usually found running after her Cypriot rescue hound or decorating a cake!