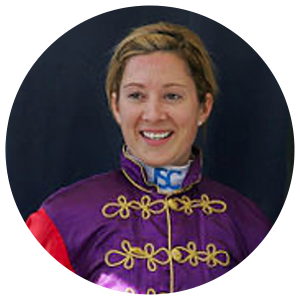 After graduating she went out and gained her experience at various racing yards. Her career really took off once she started working for Michael Bell, with whom she was apprentice in 2005 when winning the Champion Apprentice title. She was joint Champion Apprentice with Saleem Golam with 44 winners in 2005.

In 2008, she was awarded as Channel 4’s Racing Personality and was raised in the higher echelons of the weighing rooms, when winning high profile handicaps at the Chester and Ascot race meetings on Furnace. The following year, Hayley was badly injured when mounting a horse through the starting stalls, which initially threatened her to stop riding for a year. During this time she acted as guest appearances on Channel 4 Racing. Fortunately, after revised medical evidence she was able to return in the saddle successfully and ended the season with 60 winners.

The following year turned out to be successful for Hayley as it included several highlights; She had her first Group 1 ride on Barshiba in the Nassau Stakes at Glorious Goodwood, and won the Group 2 Lancashire Oaks on the same horse at Haydock a month earlier; and a successful partnership with classy two-year-old Margot Did, which included two winners and second places in two Group 3s and a Group 2.

In 2011 Turner had her first ride at the annual Dubai Racing Carnival. Additionally, she rode in the July Cup on her first Group 1 winner, Dream Ahead and the Group 1 Nunthorpe Stakes on Margot Did during York racecourse’s Ebor Meeting.

In 2012 Hayley experienced her second-best season as she rode 92 winners, becoming the first female jockey in history to ride on the Dubai World Cup night. She rode Margot Did in the Al Quoz Sprint where she finished well back in the field. In addition, she became the second female jockey in history to ride in the Epsom Derby. Turner won the Beverly D. Stakes in America, becoming the first UK-based female to ride an international Group 1 winner.

Turner was appointed Officer of the Order of the British Empire (OBE) in the 2016 Birthday Honours for services to horseracing.

Hayley attended the National Horseracing College from 9th August until 6th October 1999 where she completed the Level 1 residential foundation course.