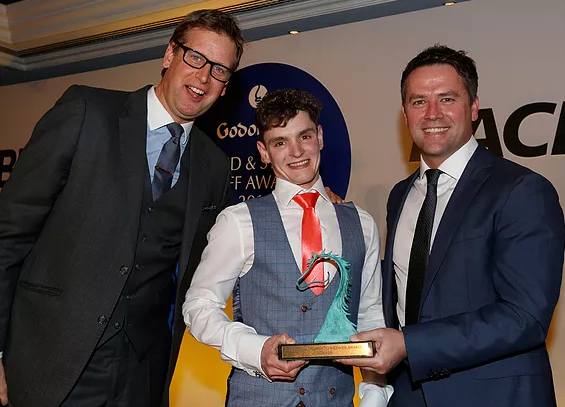 ADRIAN STEWART, who had never come into contact with horses before he attended a foundation training course at the National Horseracing College near Doncaster, has been named the winner of the David Nicholson Newcomer Award in the prestigious Godolphin Stud and Stable Staff Awards.

After impressing a judging panel on Monday morning, Adrian received his trophy from racehorse stable owner and former England footballer Michael Owen in the evening at a gala event in London’s Jumeirah Carlton Tower hotel.

Responding to questions from the host presenter, ITV Racing’s Ed Chamberlin, Adrian said: “I don’t know what to say, this is just amazing. It’s a different world I’m living in, and I couldn’t think of doing anything else.”

Adrian, 29 and from Beeston, Leeds, who was nominated by his boss, Market Drayton-based trainer David Loughnane, went to the National Horseracing College after a difficult start to life.

“I didn’t do school, and then got into trouble and was locked up,” he said. “One day, while I was inside, I visited the chaplain and he asked me what I was going to make of my life. I said I didn’t know, and he asked if I’d ever thought about going into racing. I’d never been near a horse, but he got me the forms from the National Horseracing College and I applied to go on a ten-week course.

“It was hard for the first six weeks. The others used to call me Giddyup, because I used to shout Giddyup and wave my arms around to get the horses to move. But I worked hard, took everything in, and thanks to a lot of help from the instructors and staff and my roommate Adam Ferguson, things clicked into place.

“I can’t thank them, Dawn Goodfellow, who was chief executive at the time, and everyone at the NHC enough. If it wasn’t for them I wouldn’t be where I am now. All I can do is talk about how my job and the horses have given me a life I could never have dreamed of. I couldn’t ask for more.”

David Loughnane’s commendation for Adrian said: “He has made excellent progress in a short space of time and he now rides yearlings as well as horses in training in the yard. His work ethic has always been exemplary; his commitment is outstanding, and he has become an invaluable asset to all in the stable.”

NHC chief executive Stephen Padgett added: “We are all proud of what Adrian has achieved, particularly given the circumstances in which he arrived at the College. “The award is reward for Adrian’s dedication and hard work, and is a feather in the cap for all those who helped him to get his start in racing. It demonstrates how much young people with the right attitude and proper encouragement and training can gain from being involved in such a rewarding industry as racing.”

If Adrian’s first visit to London to take part in the Godolphin Awards finals was an eye-opener, he is soon in for another.  As well as receiving a prize of £2,000, with the same amount going to his colleagues in the stable, he has also won a five-day educational trip to Dubai, including return flight and accommodation, to learn more about the country’s racing, culture and customs.

The National Horseracing College was also represented in the final stages of the awards by Ben Stephens, 24, a groom with Ruth Jefferson’s stable in Malton, who was nominated by the trainer’s late father Malcolm in the rider/groom category.

He said: “I’m just very grateful that Malcolm took the time to nominate me. It’s nice to receive recognition for a job I really enjoy doing and try to do to the best of my ability. I was really pleased to make the final three, and if nothing else, it’s nice to be able to give something back to the lads and girls in the yard. They all do a brilliant job.”