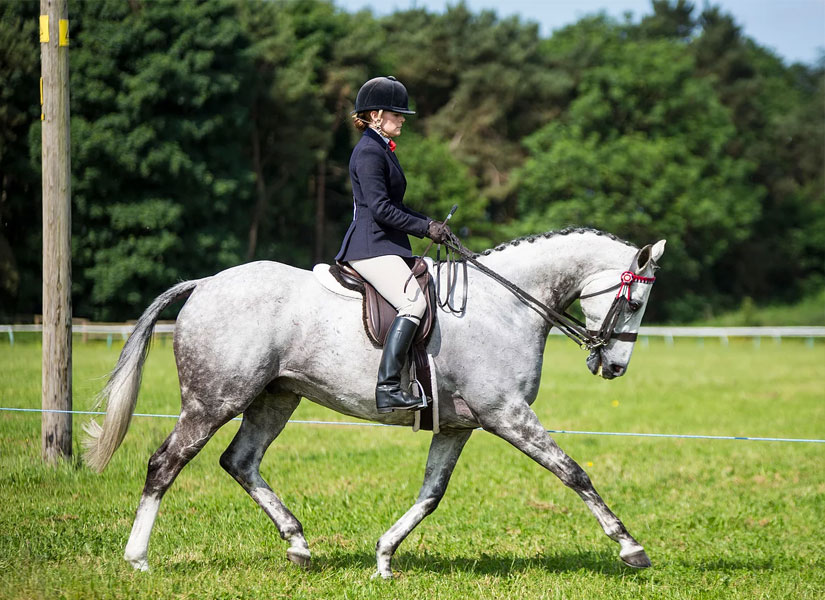 FIRST FANDANGO, who won seven times on the Flat and over hurdles and fences in nine years of racing, continued to show his versatility when he starred at the Doncaster Equine College Annual Show, hosted by the National Horseracing College (NHC) to showcase the second careers of ex-racers, who attended from all over Britain.

Demonstrating how racing’s retired horses can enjoy a comfortable and healthy lifestyle, training the next generation of horseracing professionals, the 11-year-old First Fandango was partnered by Hannah Chisman to win the ridden championship in the Retraining of Racehorses (RoR) ring.

Formerly trained by Tim Vaughan, First Fandango retired in May 2017 and started his retraining with Hannah two months later. He was hunted over the winter before moving on to local-level dressage events and showjumping.

Classes included qualifiers for national events at Aintree and Hickstead, and the winner of the Tattersalls and RoR ridden show horse qualifier was Just Blue, ridden by Helen Newbould. Now 12 years old, he was trained by Mark Rimell and retired in November 2011.

The class also featured Etienne Gerard, a six-year-old ridden by Amy Tinkler and trained by her father Nigel, who last raced only three days before the show. He will continue his new career, having come away with two second places at the show and impressed the judges as one to watch for the future.

The winner of the Jockey Club novice ridden show horse class was Stilo Blue Native (pictured below), ridden by Samantha Osborne. An 11-year-old, formerly trained by NHC graduate Rebecca Menzies until he retired in April 2017, he was taking part in first show.

The winner of the Aintree in-hand qualifier was Ingleby Hill, a 14-year-old previously trained by Micky Hammond and shown by Shelley Heywood.

Commenting on the show, which was held at the NHC’s site in the grounds of Rossington Hall, near Bawtry, RoR judge Jo Callwood said: “Many people are unaware of the amount of effort and hard work that goes into re-training an ex-racehorse to be able to have a second career in showing, showjumping, eventing or just happy hacking.

“The thoroughbreds have worked hard in their first careers on the race track and the annual show at NHC is an excellent event to celebrate the versatility of the animals that are, more often than not, bred purely for the racing industry.”

Students from the NHC also competed with the college’s own horses, giving them fresh insights before they join employers in the racing industry, and four were placed in the various classes.

NHC fundraising manager Philippa Bonham said: “Our students, horses, volunteers and staff worked hard to showcase the work we do in providing a second career for the horses from racing. The feedback from competitors, sponsors and traders was excellent, which is great for raising awareness of our horses, supported by our Second Career fundraising.”

Donations can be made at https://www.justgiving.com/northernracingcollege