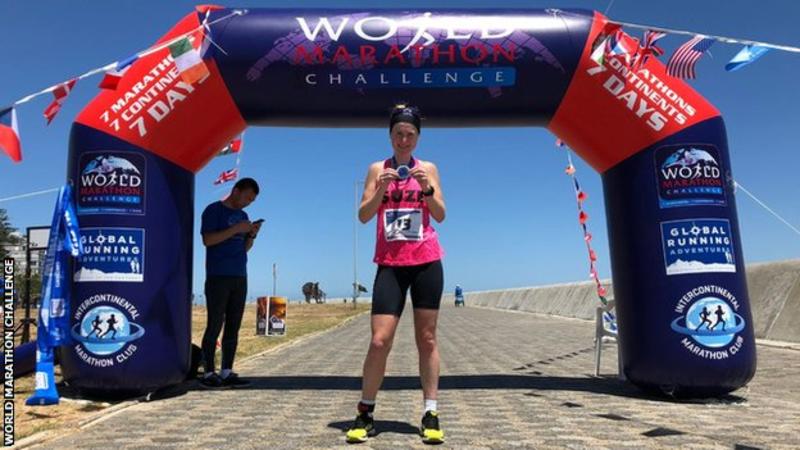 Susannah Gill’s Twitter Handle @TheIronLadyRuns rather plays down what this remarkable lady has just achieved for she didn’t just run, she won, the gruelling World Marathon Challenge.

On Wednesday (06 February 2019) Northern Racing College trustee and British marathon runner, Susannah Gill, was crowned the new World Marathon Challenge winner after completing seven marathons across seven continents in seven days. To the layman that is a gruelling 295km (183 miles) in a world record time of 24 hours 19 minutes nine seconds.

Throughout the challenge Susannah, 34, has been raising money for SportsAid, a charity which supports over 1,000 young British athletes every year at the start of their careers – when it matters most – so they have the chance to fulfil their potential. At the Rio Olympics and the Paraolympics SportsAid alumni won 150 medals for Team GB.

“It was a crazy ambition that I wanted to do. The challenge seemed absolutely irresistible to me,” said Susannah.

“Ten years ago, I just wanted to get fit and run the London Marathon. Now, marathon running has literally taken me around the world.”

Extending his admiration, NHC Chief Executive Stephen Padgett OBE takes up the story, “We have been privileged to have Susannah Gill on our Board of Trustees since March 2015.  She is a very dedicated person whose energy, enthusiasm and experience in business and the equine world adds greatly to what we do.  However, her achievement in the World Marathon Challenge is absolutely extraordinary.  The demands of the runs and the travelling go way beyond the physical and can only be achieved by a person who has phenomenal mental toughness.  Her example is inspiring.”

Over the past decade Susannah has completed 45 marathons, including 10 London Marathons, with a fastest time of 2 hours 58 minutes.

The World Marathon Challenge saw competitors tackle temperatures as low as-35C in Antarctica, the first leg of the challenge. With barely time to catch their breath they swiftly flew to Cape Town, Africa to contest the second marathon with the third leg in Perth, Western Australia where they had to battle soaring temperatures of +35C, quite a contrast to the Baltic temperatures in Antarctica.

Susannah finished second in the first marathon in Antarctica, but won each of the remaining six marathons – all run over the standard 26 miles 385 yards (42.2km) – on her way to overall victory.

Fewer than 200 people have completed the gruelling ‘777’ challenge since Sir Ranulph Fiennes first achieved the feat in 2003 – in comparison over 4,000 people have climbed Mount Everest since 1953.

Competitors took in the sights of Nova in Antarctica, Cape Town, Perth, Dubai, Madrid, Santiago and Miami, and flew more than 63 hours over 55,000 miles across the globe, providing vital time for rest and recovery in between marathons.

“It’s been an extraordinary week. I’ve loved it but it’s been tough,” said Susannah

“Although none of us have slept in a bed for a week, and we’ve probably never had more than three hours’ sleep at a time in a plane seat, strangely none of us want to go to bed because that means it’s all over. It’s the most extraordinary experience, it’s unique and I have loved it.

Susannah recalls the first time she was asked to run 800m felt like the longest run of her life. Ironically it now takes her about eight miles to warm up.

Susannah’s running ambitions took flight about 10 years ago when she set herself the challenge of running the London Marathon. After completing her first marathon she was hooked on the endorphins and the feeling of running the gruelling distance.

In preparation for the World Marathon Challenge Susannah put in an incredible amount of training and sacrificed a huge amount, “Rather than going for a nice run after work, I’ve been doing really, really hard training sessions and I’ve been a bit tired at time, “ says the new world title holder.

“I think I’ve averaged about 3:28 to beat the existing female world record, which was 3:55 [per marathon]. I never thought I could string those sorts of performances together but I just got into a flow.

“Races one to four were OK; five, six and seven were really, really hard. I started to question whether it was such a good idea, but I got through it.

“The first four marathons I was eating quite well and getting enough calories in, and then marathons five, six and seven I’ve actually been waking myself up because I’ve been so hungry.

“I ended up getting an hour’s sleep on one flight because I just had to get up and eat a packet of peanuts, two packets of crisps and a chocolate bar – anything I could get a hold of on the plane.

“That became a challenge, because I was burning four or five thousand calories a day every day for a week.

“I’ll get back to normal life and put myself back together again because I’m sure I’ll have some aching muscles.”