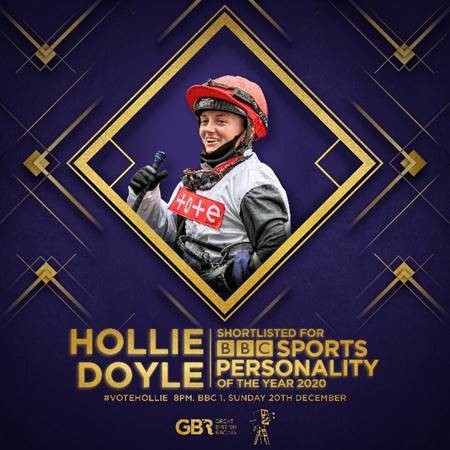 Ahead of BBC Sports Personality of the Year, this Sunday 20th December, Great British Racing has taken a look back on the remarkable rise of Hollie Doyle who has gone from first sitting on a horse at 18 months old, to a record-breaking year, which has earnt her a place as the only woman among six nominees.

The 24-year-old is shortlisted alongside Lewis Hamilton, Tyson Fury, Stuart Broad, Ronnie O’Sullivan and Jordan Henderson and voting for the prestigious awards opens from 8pm this Sunday during the live awards show on BBC One.

Hollie first came onto the racing scene eight years ago, aged 16, and rode a winner in her first race a year later at the age of 17. She has since broken a number of records for women in the sport, including her own record for wins achieved by a woman in a calendar year.

Coming from a horsey family – Hollie’s father, Mark, rode on the Flat and over Jumps and trained point-to-point horses while Hollie was little, her mother, Caroline rode in Arab racing.  and her Grandmother also bred Arab horses.

Hollie first sat on a horse at 18 months old and since then her passion for horses and determination to succeed in the sport has grown each year. She started out as a member of Randor and Hereford Pony Club, also the former Pony Club of four-time Champion Jockey Richard Johnson.

Hollie said: “I have always loved horses; it is all I have known. I enjoyed Pony Club when I was younger and after my first pony race (aged 12) I couldn’t imagine doing anything else. I came last and was100 lengths tailed off but from then it has always been about racing.”

“My idols growing up were Nina Carberry, Cathy Gannon, Ryan Moore and AP McCoy. I watched racing whenever I could and focussed on improving my riding in the hope that one day I could be like them. I hope that I can be a role model for young people too.”

Hollie had her first lead rein pony called Molly aged three, though the real star of Hollie’s early years was a pony called Jerry who was bought for her by her Grandad and who still lives at her parents’ farm in Hereford aged 32. As well as pony racing, Hollie was a keen showjumper and took part in mounted games competitions until she was 12 when she pursued her passion for racing.

Billie Thomas, who teaches at Randor and Hereford Pony Club and who taught Hollie to ride aged eight said: “Hollie has always been very dedicated, and she used to help her brother out a lot. From a young age Hollie was good at cross country and mounted games but racing has always been in her blood. We used to have races around the fields, and she just loved it!

“Hollie was so kind and helpful with new members of the Pony Club and I think this is something that has carried through to her career. She has always shown determination and patience and from a young age learnt to ride young and novice horses which has helped make her into a good rider. I am very proud of what she has achieved so far and she is a great role model for women in sport.”

Hollie completed her Level 2 Apprenticeship aged 19 at the National Horseracing College in Doncaster. Emma Cassidy who is Work Based Learning Manager there and taught Hollie said: “Hollie was always focused as a Level 2 Apprentice. She was determined even then to make a success of her riding career and she put in the hard work it required in every part of her life.  She was a pleasure to work with, she had a great sense of humour and a strong work ethic.”

Among Hollie’s successes this year she enjoyed a historical five-timer at Windsor Racecourse in August and her first Group 1 (highest-rated race) win on QIPCO British Champions Day, where she was leading jockey on the day. She also became the third women in history to ride a winner at Royal Ascot, joining Hayley Turner and Gay Kelleway.

Guy Jewell, who has been Hollie’s jockey agent since 2015 said: “I’m immensely proud of Hollie, she has a fantastic work ethic and is an absolute pleasure to work with every day. Together we set two targets this year – to ride a Group winner and to ride 100 winners again – she reached both of those and so much more which shows just how far she has come.

“I was delighted when she won the Sunday Times Sportswomen of the Year award which is a huge achievement in itself and to be nominated for BBC’s Sports Personality of the Year is massive for racing and testament to all she has achieved this year. I’m just glad those achievements are being recognised and hopefully everyone votes for her on Sunday.”

Voting for BBC Sports Personality of the Year opens from 8pm on Sunday 20th December during the live awards show on BBC One. For more information please visit greatbritishracing.com.