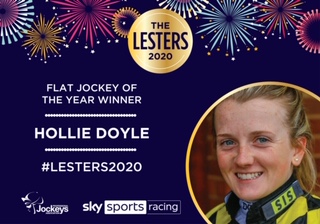 Nine accolades were presented to the winners of the Professional Jockeys Association’s Lesters Awards 2020 tonight on Sky Sports Racing, as the PJA and Sky Sports Racing joined forces to host a live broadcast of the popular awards ceremony, which celebrates the achievements of Jockeys over the previous twelve months.

This capped a sensational season which saw her break the British record for the most winners in a year by a female Jockey, ride her first Group 1 winner at Ascot, win both the Sunday Times and Sports Journalist Association Sportswoman of the Year awards and place third in BBC Sports Personality of Year.

Hosted by regular Get In! show partners Jason Weaver and Luke Harvey in the Sky Sports studio, the awards were an entirely virtual affair with new Covid restrictions preventing award winners such as Hollie, Cieren Fallon and Jonjo O’Neill Jnr from receiving their coveted trophies in the studio.

Jockeys Cieren Fallon and Jonjo O’Neill Jnr received their second career Lesters for Apprentice Jockey of the Year and Conditional Jockey of the Year, each for the second year in a row, following up from becoming Champion Apprentice and Champion Conditional, with Cieren Fallon becoming the first jockey in over 30 years to become Champion Apprentice in successive years. Sky Racing viewers chose Jack Tudor’s determined ride on Potters Corner in the Welsh National at Chepstow on 22nd December as their Jump Ride of the Year whilst Racing TV viewers voted for Dylan Hogan’s audacious front running ride on Wanaash at Wolverhampton on 15th January for the Flat Ride of the Year award. The Jump Jockey Special Recognition award was presented to stalwart of the weighing room and dual Grand National winner Leighton Aspell who announced his retirement earlier this year.

The final award of the year saw a rare honorary Lester presented to Dr Jerry Hill, the BHA Chief Medical Adviser. The Presidents’ Special Award was a thank you to Jerry from PJA Presidents Richard Johnson and PJ McDonald, on behalf of all PJA members, in recognition and appreciation of his tireless efforts this year helping racing to overcome the incredible challenges brought on from the Covid 19 pandemic. He becomes just the second person to be given an Honorary Lester who was not themselves a jockey or worked for the PJA, the only other being the legendary Sir Peter O’Sullevan.

Paul Struthers, Chief Executive of the Professional Jockeys Association, said: “The Lesters are always a special occasion and in the absence of being able to hold an actual ceremony we can’t thank Sky Sports Racing enough for agreeing to host this live special as well as Racing TV for assisting us with the rides of the year footage. “We’re delighted for all the winners and hope it clearly demonstrates to them the regard and esteem in which they are held by their peers. Hollie’s achievement in becoming only the second jockey in Lesters history to win three awards in a year, and becoming the first female jockey to be crowned Flat Jockey of the Year, should not be downplayed. “We were also delighted to be able to recognise Jerry’s work through the Special Presidents Award. As well as overseeing improvements in the medical care of jockeys, including the expansion of on-course physiotherapy and offering one-to-one advice and support to Jockeys who are hospitalised, his tireless and ongoing efforts to get us back racing whilst ensuring the health and safety of the sports participants, hasn’t gone unnoticed by our members and this was their way of saying thank you.”